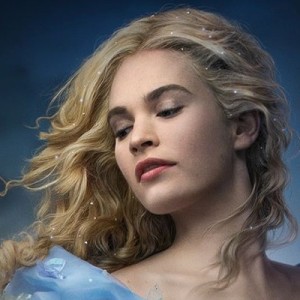 Disney’s live version of Cinderella features several fun and wearable hairstyles, all of which are likely to be trending this year for proms, parties, weddings and Halloween.

With large soft lose curls highlighted with crystals to make her hair sparkle the style is elegant, glamorous and magical all at the same time—an updated style fitting for our new Cinderella.

Of course the question that everyone is asking about her ballroom hair style is,

“How can I get my hair to sparkle like Cinderella’s in the Ballroom?”

The secret (according to Allure) was real Swarovski crystals glued into Cinderella’s costume hair with surgical adhesives by hair stylist for the film Carol Hemming.

or even just using Silver Glitter

either of which end up being much less expensive than using real Swarovski crystals.

The three hair styles featured in Cinderella include:

See how to recreate these three styles and a bonus style for short hair at the Cinderella Live Hair Style Ideas page.