Scarlet Overkill is the sexy, sinister female villain from the Minion Movie, who flies into Villain-Con in her ruby red rocket dress.

Her costume is going to be very popular with sassy teen and tween (8 to 12 year olds) minion fans, their mothers and maybe some fathers (see right) as their Halloween costume, one for the movie premiere or any minion movie party costume.

Skater dress styles, full skirt party dresses and retro 50’s style dresses are good alternative styles for both teens and tweens, since they have the full skirt with more of a top dress part.

We’ve come up with ideas for putting together costumes with pre-made dresses and patterns for sewing a sassy, sinister Scarlet costume including the needed accessories for teens and tweens who want to dress up like the newest female super villain, Scarlet Overkill.

Since Scarlet is a sexy, sinister adult, super villain her costume needs to be modified a bit (mostly the red dress) for wear by teens and tweens (8 to 12 year olds) who can be sassy and sinister in a more age-appropriate costume.

From top to bottom is a list of the items needed to make your own Scarlet Overkill Costume.

We’ve modified the original list for teens and tweens. 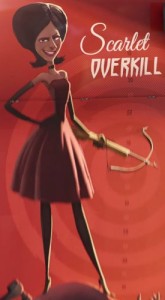 Scarlet’s sexy look can be toned down a bit for teens focusing on the sinister parts instead of the sizzling ones.

For teens look for a dress that emphasizes the 60’s party dress style or even a retro 50’s style with a big full skirt. Make the skirt part of the dress even fuller by wearing a petticoat underneath.

Putting on the finishing touches with the bouffant flip hairdo, White Retro Sunglasses

, long black gloves and stockings (see Accessories) and for teens heels to create the look of the costume. Hunger games fans may want to add in gold painted Wooden Crossbow

to look like the one she carries. Remember to put on a sinister smile.

I found several pre-made red dresses that would work well for teenage Scarlet fans with skater dresses and a vintage 50’s style dress with a long skirt that will work with a petticoat slip to create an even fuller skirt.

For those who want to sew a Scarlet dress or a Scarlet-inspired red dress there are several patterns that would work to create a party dress with a very big full skirt, popular in the 50’s and the 60’s. The sewing patterns are sized down to a size 6 which will fit many smaller teens.

You could even pull off a variation of the dress with just simple straps like the Simplicity or the McCall’s pattern (using the style shown with straps in black and white) or by doing a 50’s style vintage dress a la Audrey Hepburn with a full skirt and a sleeveless bodice like the Vogue Pattern.

For Tweens, the 8 to 12 year olds, start with a basic red dress that has a big full skirt. To look like the young Scarlet Overkill fan to the right, all you need to add in is a pair of old-style cardboard 3D glasses.

The red dresses below are good starting points for a girl version of a Scarlet Overkill Costume. To get the plainer, clean lines of Scarlet’s dress remove all of the the extra embellishments and accessories on these dresses like the flowers, belts, ribbons and bows. Leave any sparkle since tweens tend to like a little more sparkle.

I found several pre-made red dresses for tween girls that look a lot like Scarlet’s or give the illusion of a her dress, but still look like something that a younger girls would wear.

The Cinderella and Wonder Girl dresses have big full skirts with thin straps to keep the dress up. The skater dress has a sleeveless top with a big full skirt.

Adding in the accessories (included below), like her 60’s style hairdo, retro glasses, long gloves and black tights helps create the illusion of being Scarlet Overkill.

Patterns for Tweens and Girls

For those interested in sewing a Scarlet dress there are several patterns from which to choose that would create a full skirt on a party dress with a sleeveless top (in place of the strapless version) or an older 60’s halter style pattern like the one to the right from McCall’s 3260.

Create a big puffy red dress without any of the extra bows and flowers. Add in extra taffeta layers or wear a petticoat to make a big skirt like Scarlet’s.

By adding in the right style of accessories to a red dress with the right hairdo you can easily create the effect of a Scarlet Overkill Dress.  Some of these items might even be ones you have at home, like a length of black ribbon for a choker.

The accessories to include to complete the costume:

* To make a black choker all you need is a less than a yard of 3/4 inch ribbon. Finish the ends with a Ribbon Choker Findings Kit or simply tie it on to fasten.

Scarlet’s gloves go over her elbows (actually half way up her arms) making them full length or Opera length gloves. This length is a bit harder to find for younger girls. To the elbow length is more common.

Scarlet’s hairstyle is called a bouffant with a flip. If you look at the hairdo diagram to the right you can see that she has a big bouffant hair style on top, which is teased so it puffs out and the outer most layer is smoothed down.

To finish the look the 60’s inspired hairstyle the ends are flipped up. We have videos on the DIY Scarlet Overkill Hair and Makeup that show you how to get the bouffant with a flip hairdo.

This look can be recreated if you already have short hair (dark is preferable). Another option is to get a short wig, which can be turned into a Scarlet hairdo with a few easy adjustments.

Teens can wear adult wigs, tweens may have to look for slightly smaller wigs depending on how close their head size is to an adult or restyle a Mavis wig from an old Hotel Transylvania costume or a Lucy Van Pelt Wig from Peanuts.

Since the flip is already in the wigs, puff up the bouffant portion. Sweep the bangs to the sides and remove the headband and you’ve got a Scarlet styled wig.

If you want even more help in figuring out her hair and make up, see the DIY Scarlet Overkill Hair and Makeup.

The yellow minions are going retro or back in time to 1968, the time 42 years B.G. (before Gru) when three of them—Stuart, Kevin and Bob—go to work for Super villain Scarlet Overkill. Their yellow minion costumes for the Minion Movie are slightly different than the ones for Despicable Me and Despicable Me 2 (the silly yellow minion costumes), so we’ve got a page just for their new costume. If you are interested in making your own minion goggles, we have a page for that too:

For more ideas and help in putting together a Scarlet Overkill costume, including how to do her 60’s inspired hair and makeup take a look at the related pages:

To share our ideas and inspiration for making your own Scarlet Overkill, Super-villain costume and to collect ideas from other Scarlet fans we have a Pinterest board especially for the DIY Scarlet Overkill Costume Ideas from the Minion Movie. Be sure to pop over to Pinterest and follow us for updates.

This board is a collection of Scarlet Overkill images that inspired her costume, hair and makeup along with a few minions added for fun.

Scarlet Overkill Images from Illumination Entertainment and the Minion Movie.