Young girls and tweens are wanting to celebrate Halloween by dressing like the empowered female super hero (heroine) from TV’s Supergirl.

Working quickly there is still be enough time to pull together an outfit for Halloween. We have several ideas to modify or mash-up a costume to turn any young fan into her favorite new Superhero.

This page features ideas for turning girls and tweens into their favorite female superhero.

If you need teens use the smaller sizes from the adult crime-fighting suit page.

Meet a New Kind of Superhero

The original CBS show, now on CW, features Melissa Benoist as Kara Danvers  or Zor-El, cousin of Kal-El, better known to most as the DC Comics’ Superman. They are both originate from the planet Krypton and possess superhuman powers.

Melissa Benoist described her character as wanting to do good for those on her adopted planet, earth. The purpose of the show is to help people in recognizing one’s potential and inner strength…

It’s a lot about recognizing your strength and potential and letting yourself be surprised by what’s inside of you. 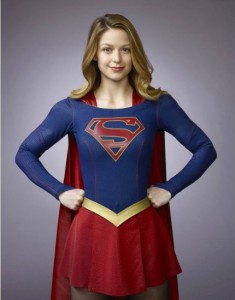 The crime-fighting attire for the show has been designed by Oscar-winning Colleen Atwood, who re-imagined the iconic DC comic superhero character and many of the ways we are used to seeing her attired.

In designing Supergirl, I wanted to embrace the past, but more importantly, thrust her into the street-style action hero of today.

Melissa has commented on the transforming nature of the Superhero outfit.

The first time I put the costume on, I definitely felt, like, this transformation — something inside of me clicked.

It’s kind of impossible not to feel strong and brave.

When you look at the official cast photo above or in the full shot below, you can see Melissa’s empowered stance and the transformation to the superhero before your eyes.

The Supergirl costume is one of several that I identified several years ago in an article I wrote collecting Empowering Costume Ideas for Girls and Tweens. I was researching and looking for Halloween outfits that make them feel better about themselves and maybe even inspire a future career.

As Melissa noted above, just putting on the superhero outfit can transform you, making it “impossible not to feel strong and brave.”

It makes sense to me as a mother to let our young female super hero fans feel strong and brave after putting on the costume.

This newly designed version is age-appropriate for girls and tweens that lets them dress up like a female superhero.

One huge plus with this updated version of the superhero work attire is that it doesn’t have a plunging necklines or bare midriffs.

To make the costume more wearable for all ages, the skirt could be longer, but this is the length that is being worn in the school settings. It is easy to adjust the look by adding in a longer skirt or a pair of athletic Capris or pants.

From top to bottom is a list of the items needed to put together your own female Superhero attire for girls or tweens:

The best update for this street-style action hero look, one that makes it female-friendly for young and older women, is that in addition to an appropriate neckline and a covered waist, she has reasonable heels on the boots. She might actually be able to run in them for a change.

The reason I like using regular clothes when putting together a Halloween or cosplay outfit is that after you’re done with the costume the separates can be reused as part of a normal wardrobe.

The royal blue top and short skirt can be worn long after Halloween or the party. Look for slightly darker colors, which will look more like the updated television version. Look at the clothing separates that can be used for a costume and then worn to school.

This updated cape for the female hero looks to be made from a faux leather, giving it a sheen. It also appears to no have the big “S” logo in the back as seen in  Superman’s cape. Check the length of the cape that you child will need (measure from the neck to the back of the knee) before ordering.

For younger super heroes, consider using red flats shoes with deep red or burgundy knee high socks or leg warmers. These can create the effect of red boots without needing the boots. Check the boot size to make sure if you are ordering for kids, little girls or young girls.

A super easy and super quick way to create a female superhero look is to use an officially licensed DC comics tee, like the one to the right.

Many of these junior-sized come with attached capes already, like the one on the adult page or the casual, super sporty version. If there isn’t a cape, then add one to the back.

The smaller junior sizing for this shirt will be perfect for fitting tweens (10 to 12).

Once you have your tee and cape, just add a skirt and red boots or shoes and socks and you are ready to go.

I was surprised to see the Superman “S” Logo being used for this female superhero, until we discovered that the “S” is from the family’s code of arms from the House of El, to it works for which works for his cousin, Kara Zor-El.

I have adjusted the “S” logo below to reflect the darker, richer red tones from the new show. The actual version of the S is done with fabric paint as seen in the close ups below. If you have a steady hand, you can use the image to trace on the logo with red dimensional fabric paint, so the image is embedded into the fabric.

Click on the image to get the largest size, then download and print, or use as a template to cut from a deep red fabric, felt or foamie to create the S logo. Cut out the white areas out from in the image, so the blue color of the top will show through, then glue, sew or applique the image in place.

Make a DIY Supergirl Costume for Girls or Tweens

There is a definite advantage in making your own cosplay clothes, since you can pick the fabrics and colors and create something that can be used again and again, instead of the single-use Halloween costume versions.

Use red faux leather for the cape, blue spandex for the top, bright gold spandex for the belt and red cotton twill fabric for the skirt. For teens you’ll want to move up to the adult patterns which are on the other DIY Costume page. The smallest adult size which will fit many teens, with just a bit of adjusting.


The children version of the superhero patterns that we found were McCalls MP371 and Simplicity 1035. Simplicity 2567 has a generic superhero costume, one for girls and one for boys. KwikSew K3723 is a unisex cape pattern with several different sizes. McCall Pattern M6626 for kids has a whole range of superhero capes and masks.


Before making your pattern purchase double check that you are getting the size that you want either child or adult.

McCalls Mp371 is the children’s version McCalls M701 the adult, Simplicity 1035 is the child version, Simplicity Simplicity 1036 or 0223 are the adult versions. For teens you’ll want to move up to the adult patterns which are on the other DIY Costume page. Adult costume patterns are sized down to a size 6 which will fit many smaller teens.

For Halloween 2016, Rubies created an actual TV version of the DC Comics Superhero outfit (to the right). It is designed in the updated slightly darker colors scheme from the television show.

It also has been designed with an appropriate neckline and waistline for young superhero female fans. The hemline is with the short skirt from the television show, but can be remedied by adding a pair of shorts or spandex underneath.

Add a pair of boots and your Superhero is good to go.

This official DC Comics costume is going to be very popular this Halloween.  You may do better in putting together your own by using separates which can be used again.

This premade TV version costume is one the best ones for younger girls and tweens, since they are an empowered girl version compared to earlier styles.

To make it easier to find the details you need we split the child and tween version from the adult costume. If you are interested in making an adult or larger teen costume see the other page.

We’ve pulled together ideas and images for making your own empowered, crime-fighting, female superhero costume as a Pinterest board, DIY Supergirl Costume Ideas for TV’s Female Superhero.