The young impish, care-free Moors fairy has a fresher and more innocent look than the makeup worn by Angelina Jolie’s older brooding Maleficent.

Even with a less dramatic look than older Maleficent, Isobella Molloy, the tween-age actress (at the time) who plays the younger fairy, still had to sit for 3 hours getting makeup, pixie ears, horns and hair applied to be transformed into the wood fairy.

Let’s take a closer look at the details of her nails, makeup and hair.

The nails for the young Maleficent are a similar shape (almond) and sometimes a similar color to older Maleficent. In much of the movie both young and older Maleficent’s nails are painted with a nude color nail polish or lacquer with a more subtle under mani.

*How cool is a nail color called “Uninvited”?

Look for formulas that are free of toluene, formaldehyde and dibutyl phthalate (DBP), so you don’t get exposed to potentially toxic substances.

In the video tuorial below Khristine Elise show how to do the dramatic under mani nail version of Maleficent’s nails using nude on top and red lacquer underneath the nail.

To recreate the look of younger Maleficent, just use a nude or neutral color nail polish or lacquer. You can also paint the nail underside nude, neutral or white.

Maleficent’s nails are not only a certain color, they are a specific shape. To create animal-like fairy nails, an almond shaped nail was used, probably because it is like a claw.

You can file your nails with a nail file into almond shapes or create them more easily using artificial nails glued over regular nails. For those who would prefer having their nails temporarily almond shaped, artifical nails are a good way to get the pointed, enlarged, almond nail.

In the nail video tutorial abetweene shares how to get almond shaped nails by carefully and precicely filing them into shape.

Many of the other YouTube tutorials show how to use artificial nails, then cut and file them into the shape of an almond. 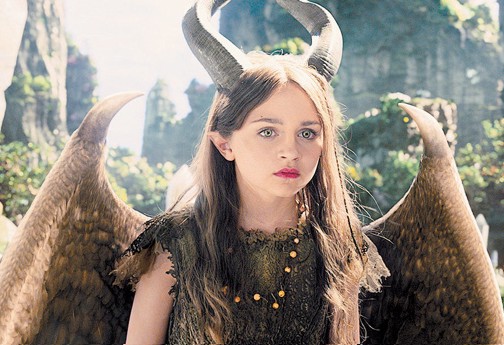 As seen in the image above, Young Maleficent’s make up is not nearly as dramatic as the makeup worn by Angelina Jolie, still the tween actress, Isobella Molloy, had to sit getting makeup, hair and horns applied for 3 hours to be turned into the impish wood fairy.

To make her look more like a fairy, it looks like she may have some prosthetic cheek enhancers (much more subtle than Angelina’s) along with th every obvious pixie ears. Then of course there are the horns.

Her face make up is very subtle. With good enough skin one may only need to apply a bit of mascara and eyeliner to achieve her natural fairy look. A light amount of foundation can be applied to even out any skin tone issues and blush can be applied under the cheekbones to enhance the effect.

Her cranberry-colored lipgloss is the one aspect of her makeup design that stands out and makes her lips more prominent. The official lipglass deep red lipgloss from MAC released for the Maleficent Movie is Anthurium Lipglass, another more expensive makeup choice.

The beauty products needed for her makeup include:

For those without naturally brunette hair, or don’t want to use their own hair, getting a brown wig or brown hair piece or extensions will help to achieve the young Maleficent look.

Fixing the hair, either normally or as a wig, is pretty easy. The style is long and straight and enhanced with a small braid on the left-hand side of the face near the front (you can see it outlined in dark against her backlite hair).

One advantage to using a brunette hair piece is that it makes it easier to secure any horns on the head. Put the horns on (usually with a headband or elastic stretch band and then place the hair piece or wig (with holes cut for the horns) on top. Using a wig or extension will help secure the horns in place on top of the head.

may be the best replicas of Maleficents horns and they definitely look a lot like her horns in the movie, however with them measuring 8 inches, they are not an ideal size for young children, tweens and smaller teens. Another benefit to these horns is that they are very light weight.

For more information on making her costume, her amazing horns and her accessories (necklace, bracelet and treasure pouch) on these related pages:

This board is a collection of Young Maleficent images that inspired her costume, hair and makeup. For Maleficent herself, you can see our DIY Maleficent Movie Costume Ideas.

This costume breakdown tutorial was originally featured as the Young Maleficent Movie Costume lens on Squidoo, now on HubPages.